For over 10 years, IntelliVision® has provided advanced facial recognition analytics with an exceptionally high accuracy rate on public standard data sets. Our facial recognition software detects faces in real-time and provides an alert when a match is found with a face in the database. Around the world, IntelliVision AI-based face recognition is used in thousands of cameras for access control, VIP greeting, shoplifter and unwanted person applications. 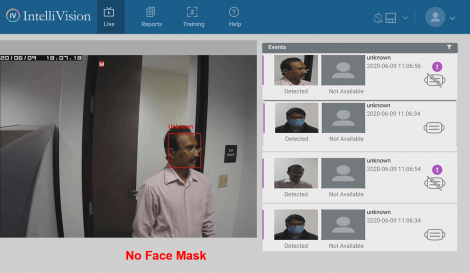 As we continue to grow and adapt to the needs of our customers, we have introduced new analytics to help address global concerns during COVID-19.

New Technology to Keep You Safe

Recently, we announced the addition of our face mask detection to provide business owners a solution to returning to work in addition to boosting the public’s confidence in safety during the times of COVID-19. According to Vaidhi Nathan, SVP Cameras and Analytics at Nortek Security & Control (NSC), face mask detection is the first of a number of products to be released by IntelliVision as part of a broader COVID-19 protection strategy.

“The IntelliVision face mask detection analytic ensures that employees, shoppers and customers are complying with safety guidelines, and [the technology] is designed to send an alert if a mask is not detected,” said Nathan.

We are committed to helping our customers and the market return to work safely through the IntelliVision family of AI video and audio analytics solutions including:

Stay tuned for new developments and the next release of solutions coming soon!

Learn more by contacting us today.

Face recognition is increasingly being used in access control for primary or secondary authentication, giving users an automated, frictionless experience. Access cards are easy to duplicate and to lose, leaving offices and secure facilities at greater risk of unwanted intrusion. But you always carry your face with you, and anti-spoofing technology makes sure it’s yours. Today’s multi-core camera chips allow you to embed face recognition software in the camera itself, so you don’t even need a server.

Race and gender bias in face recognition can be an issue if the recognition models have been built with insufficiently diverse datasets. Often, the datasets are biased towards the gender and race of the developers themselves, who tend to be white males. But there are datasets available with millions of faces of all races and both genders. At IntelliVision we have ensured that our facial recognition models have been built and tested with multiple ethnicities and genders, ensuring that everyone can be detected.

Adding face recognition to turnstiles and gates can improve both security and speed, leading to a frictionless experience for staff or for people passing through checkpoints. Image databases can be created from existing employee records or passport data.

But what about “spoofing”, where someone holds up a photograph or even a cellphone video of the person’s face? Won’t that allow the wrong person through? That’s where “anti-spoofing” comes in. Normally this requires a 3D or stereo camera to detect depth and movement. But at IntelliVision we have implemented anti-spoofing in regular 2D cameras, by detecting “liveness” over a number of successive frames. This ensures that only real faces are detected and recognized.

The average human can recognize faces with an accuracy of 97.5%. As of 2018, face recognition (FR) technology is achieving accuracy rates of 95-99%, with sub-second recognition times. Of course it’s easy to throw computing power at the problem from a local server or in the cloud, but with today’s multi-core camera chips such as those from Ambarella or Qualcomm, the really interesting applications are doing face recognition at the edge.

The applications of facial recognition (FR) are almost without limit. For security we can dispense with key cards, as a camera at the office door or turnstile recognizes you and lets you in without you taking your hands out of your pockets. You may forget to bring your card, but not your face. It works just as well in apartment complexes, warehouses, hospitals, care homes, data centers or secure government installations. Retailers can quickly and automatically recognize known shoplifters or serial returners from a central database, cutting down on fraud and pilfering. Schools can ensure that only authorized people are allowed in. Banks and financial centers can match your face with your account records.

There are also added-value possibilities with FR. When your best customers come into your store or restaurant or casino you can be alerted to the presence of a VIP and give them personalized service. Better still, when you come home from work your home recognizes you and sets the temperature to your liking, and plays your favorite Led Zeppelin channel on Pandora. Or Beyonce (home personalization).

Of course problems can sometimes occur. In China, a country with 170 million cameras, and 400 million more on the way, a well-known businesswoman was recently “named and shamed” for jaywalking. Her face had been recognized on the side of a bus as it sped along. The error was quickly addressed in an upgrade according to the authorities.

Another issue with FR is bias. The training database used in the deep learning development phase of the algorithm has a major bearing on the accuracy of the recognition, and bias can easily creep in. Developers are usually male so they may unconsciously pick more male faces to train with, and a database with predominantly Caucasian faces may have difficulty accurately recognizing Asian or African faces. “Gender Shades,” a study on some of the most popular FR systems by Joy Buolamwini, a researcher at the M.I.T. Media Lab, has shown that female black faces are badly underrepresented, leading to low accuracies.

There are also the scenic characteristics of the captured image to take into account. Poor lighting makes it harder to recognize faces – even for a human – and dark-skinned faces in low light are the most difficult. Low light conditions can be alleviated somewhat by the use of infrared lighting which some cameras will provide. Another issue is that of “liveness,” whether the face in front of the camera is that of a real person or just a picture. The algorithm has to be tuned to look for the 3D aspects of a live face such as different distances, small movements etc, instead of a static picture, to prevent spoofing. (See “anti-spoofing”)

Lastly is the thorny issue of privacy, a discussion which is more in the realms of ethics and law rather than technology. In China your face is being captured everywhere you walk whether you like it or not, and likely stored for future unspecified uses. In Europe, Facebook’s auto face-tagging has been blocked. But here in the US there is no Federal privacy law like Europe’s GDPR, and only three states – Illinois, Texas and Washington – have state-level Biometric Information Privacy Acts, though Texas and Washington do not allow private lawsuits.

As a security technology face recognition is here to stay, and as with any new technology the issues are being addressed almost as fast as they crop up. It may not be as accurate as iris scanning or fingerprints, but it is quicker and less intrusive and offers a convenient and secure method of access control, visitor tracking and criminal detection.

It seems that as soon as a security technology is invented, someone finds a way to break it. You’d think that facial recognition was a pretty fool-proof way to authenticate a real person. Your face is your face and it’s unique (apart from your evil twin that is). But what if I held a high resolution color picture of your face up to the camera? Or maybe a video on a cellphone? Could I fool a facial recognition system into thinking I was you? Maybe.

The way to ensure that the face in front of the camera is your actual face is to implement anti-spoofing. At IntelliVision…

END_OF_DOCUMENT_TOKEN_TO_BE_REPLACED

© Copyright 2022 IntelliVision. All rights reserved. A subsidiary of Nortek Control LLCBack to top